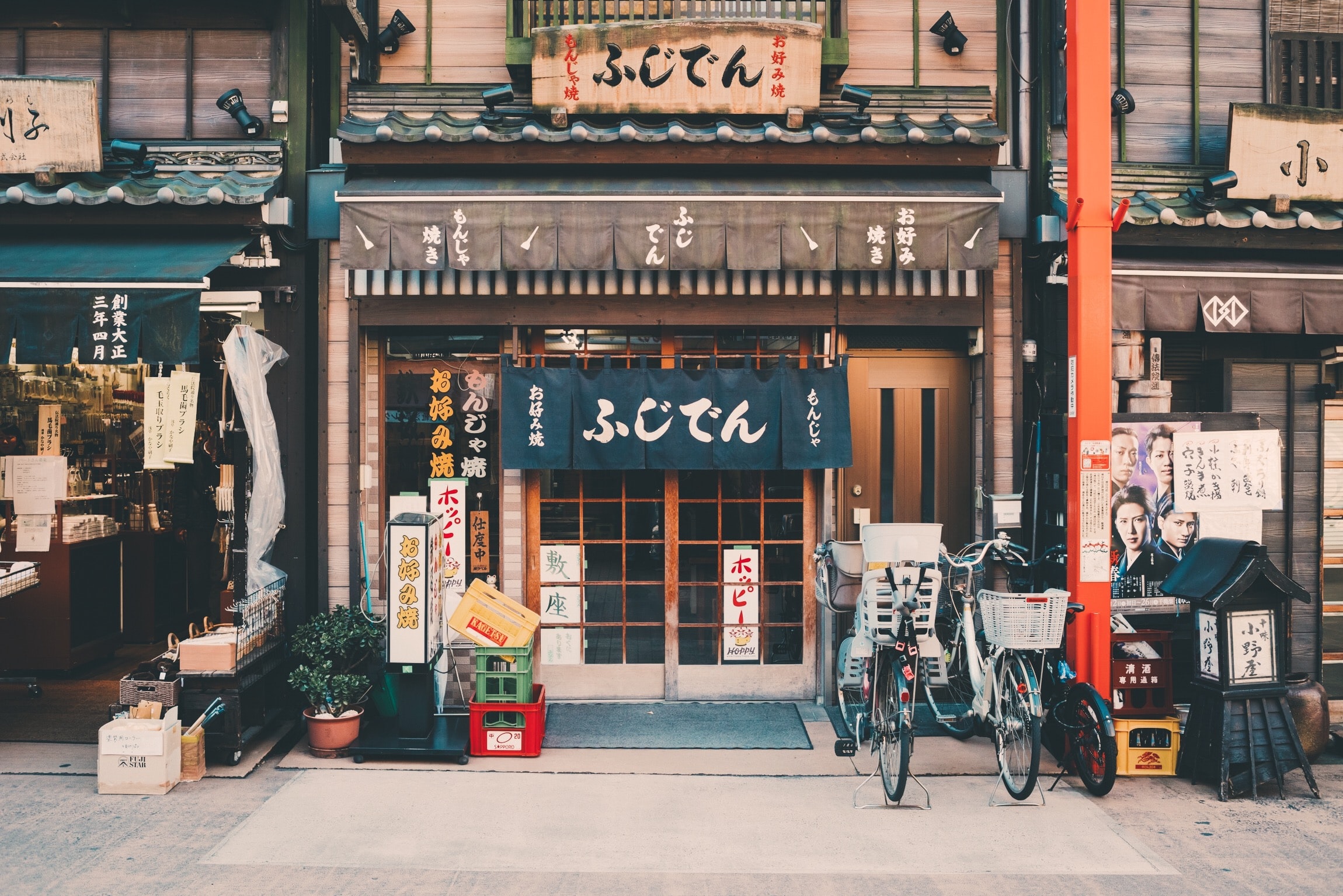 The world of leveraging

Global pandemic not only accelerated widening gap between strong and weak industries or development of e-commerce and IT giants, but also spurred giant leap in the national and corporate debt ratios. Total global debt reached a new record of 331% of GDP in 1Q 2020 since end of 20191, primarily caused by increasing indebtedness of mature markets. Sovereign debt champion remained the same for the last 30 years – Japan – with a national debt at 236% of GDP, followed by Greece with leverage at 180% of GDP. For Japan, this is basically a legacy debt from the Asian crisis of the 1990’s, which was never paid off; moreover, it was increased further following the trend of growing sovereign debts across the globe.

However, on the corporate level things look quite different, and this is where Japanese companies can be praised. Since the peak in 2009, corporate debt to GNP in Japan decreased by 7%, while in US it rose 1.5% and in Europe – by 5%.

Successful deleveraging of Japanese companies after the financial crisis was one of the reasons why more of Japanese firms tend to enter our Global top 100 (8% in 2014, 18% in 2019 and 13% in 2020), while their share in the world stock index remains stable.

Fig. 2:  Share of Japanese companies in MSCI World AC and in Global best 100 companies based on Excellence award methodology (%) 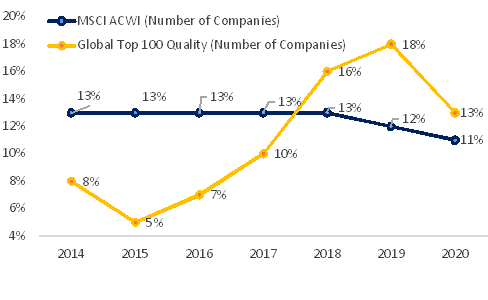 This is quite surprising, given that Japanese companies have always been heavily indebted and exhibited low profitability levels. This was also the reason why historically we had to soften some selection criteria for Japanese market as compared to US and European stock universes simply to have enough companies on our investment radar. Indeed, many well-known Japanese companies such as Toyota or Shiseido managed to improve their financial position by reducing debt, while lifting capital profitability, thus becoming more attractive for the investors believing in quality.

It seems that there was a true revolution in financial management among Japanese companies as fundamentally they look much better now than they did several years ago. While the quality of financials in US and European companies deteriorated recently, the Japanese companies, which have been always lagging behind, started to catch up. Return on equity has increased, mainly driven by higher margins, unlike in the U.S., where the improvement primarily was due to higher leverage.

Contrary to the global trends, Japanese corporates managed to reduce their debt burden, and now they look much more stable financially than their peers in the US or Europe. Although they still lag behind with regard to the levels of capital profitability and margins, the gap has been substantially narrowed. If this trend continues, they might soon overtake their global peers also in that domain.

One of the hypothesis, which can be put forward to explain this phenomenon, is that companies in Japan are reducing their investments in fixed assets, which usually are less productive. At the same time there is a growing share of intangible assets, which is a proxy of company’s competitiveness. Another point to mention is the ultimate improvement in corporate governance system, which was always very traditional in Japan and because of that had negative influence on firms’ development. For instance, ‘the percentage of listed companies that appointed more than one independent director increased from 21.5% in 2014 to 93.4% in 2019’2.

Japanese market with its relatively low price multiples has more distinct value style bias as compared to US or European stock markets. And this might become an obstacle in attracting international investors when the herd favours growth stocks, particularly in IT sector. True, Japan produced a great number of mature companies, yielding it another champion title: more than half of known pool companies are older than 200 years3, which is another indicator of sustainable quality. However, also mature companies are reinventing themselves to continue providing growth as once did Nintendo, evolving from simple seller of playing cards to video game company. 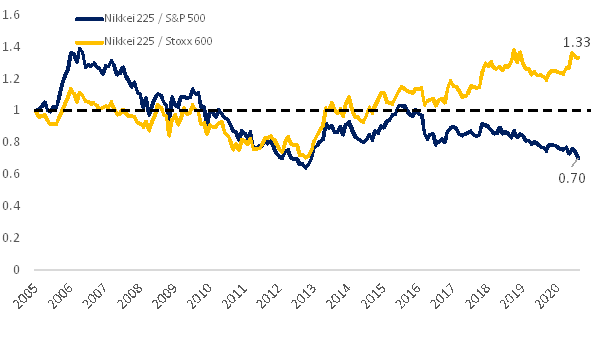 The chart above shows that even though Japanese companies surrendered to US equities, they managed to outperform European ones in the period when corporate fundamentals were improving substantially. Focus on corporate excellence, through application of stricter stock selection, is able to lead to the market outperformance, which was particularly well-demonstrated by Quality stocks in Japan that managed to outperform the market during the COVID-induced sell-off.