Energy sector: Why Quality does not stick?

Energy is slaying it for the second consecutive year

With 2022 being a gruesome year from every perspective – geopolitical, economic, as well as financial – it nevertheless offered investors a narrow path towards tangible profits – through Energy sector. With the entire MSCI World Total Return Index contracting by 20% (as per October 27) and majority of other constituents falling double digit, Energy stands out with an impressive 44% gain. In fact, 2022 so far is the second-best year for the sector return-wise in 20 years and it is yet to be seen if it manages to beat the gains made in 2021.

As a Quality investor, we often make a point that Energy sector as such offers little to no Quality, which for a second year in a row serves as a very strong headwind for this particular style performance-wise. What is it that sector players lack in order to qualify as quality? Has it always been the case that Energy companies fail to meet quality criteria or has something changed along the way? Given the circumstances, these are the questions we have to address daily; therefore, let us take a dive into the sector and see why Energy is largely an outcast when it comes to Quality Style.

When profits are the function of commodity prices

One fundamental concept behind quality is durability of the business model and sustainability of competitive advantage, which rather often than not offers good visibility into what will drive future operations. Latter receives constant nourishment (e.g., through R&D) and has long-term focus. Products or services of a quality company are often of critical nature/high value added, which gives it a set of levers to pull if environment gets rough, thus softening top-line impact and safeguarding margins. And although no company is shielded from external shocks, economic downturns or demand shifts, business model of a quality stock usually offers a relatively smooth ride through the cycles return-wise. And this is something energy companies simply cannot offer, just because in the centerpiece of their operations is a highly volatile, tradeable commodity with inelastic supply and demand profile. 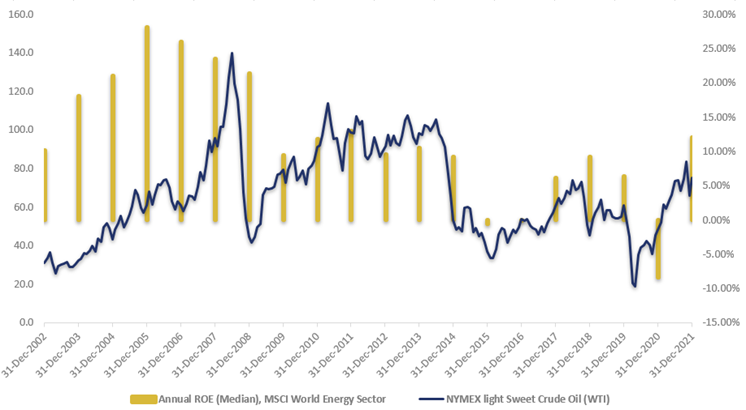 Oil is commonly referred as the most volatile of commodities. When pricing of your key product is heavily influenced by politics, human-made and natural crises, speculation (futures contracts & derivatives) and indirectly controlled by OPEC (production), whether you will have a good or a bad year financially is rarely a function of your own efforts, but rather a byproduct of external forces at play (Fig. 1). This is why about 65% of Exxon’s jump in 2021 earnings was accredited to nothing else but a commodity rally and this is exactly why the sector as such lacks sustainable growth story.

No other sector is as erratic

Surely one can argue that Energy is not the only sector that has inherently high volatility and cyclicality attributed to it, as so are Materials, for example. Nevertheless, latter still manages to produce companies that meet quality criteria, however few. And while this is an on-point statement, it leaves out one crucial detail – Quality Materials are not what the sector usually has to offer. They exhibit remarkable resilience over the cycles, demonstrate durable ability for cost absorption and have long-lasting history of operational excellence. Curiously enough, Quality Materials are more native to Europe, Switzerland especially, than they are to the USA. If one looks at the historical margin development of Quality Materials as well as their capital intensity, it is relatively easy to spot certain consistency (Fig.2).

And while there are, most certainly, fluctuations on the profitability side, they are never violent nor extreme, which can’t be said about six stocks that capitalization-wise account for a solid half of the MSCI Energy Sector- Exxon Mobil, Chevron Corp, Shell, Conocophillips, TotalEnergies and BP – especially after 2008. Another important thing is that, although both groups are capital intensive by nature, Quality Materials have managed to keep their capital intensity in check over the last decade, while that of major Energy companies has experienced significant increase despite erratic profitability.

A golden decade for oil

It is worth noting that the first decade on the chart above, one spanning before 2008, and the decade that followed paint surprisingly different pictures for the Energy space. In 2000’s, crude oil was one of the defining investment trends, fueled by fundamental driver – ever increasing demand from China that thirsted for energy to bolster its economic growth, alongside with other emerging economies, like India. Major oil producers thrived – from 2003 until 2008, sector heavyweights managed to deliver six consecutive years of revenue growth and margin expansion, while paying hefty dividends. No wonder that in 2006 Exxon Mobil has replaced General Electric as the world’s largest company in terms of market capitalization.

Because of this ongoing improvement in fundamentals – a trend that held for years, Energy was not at all a stranger to quality space, especially in US. However, as oil producers did not expand capacities accordingly to accommodate ever growing demand, thus capping supply, the price of black gold rose exponentially right until financial crisis of 2008 put an end to this nonchalant era of high returns. And although price of crude oil did manage to rebound afterwards, there was no way to replicate the conditions of the “Golden decade”. And the environment was no longer kind to the sector either – even before the entire decarbonization story became a thing, Energy experienced two major shocks, one back in 2014-2016 as shale oil gained traction, and second most recently in 2020, thus baking in volatility into the sector for good.

The world is changing, and so are the Energy companies, with legacy players transforming themselves and new entrants emerging to accommodate the needs of greener world of the future. And who knows, perhaps they will transform themselves just enough to fill the ranks of quality once again.