Mounting headwinds in the Baltic market

Mounting headwinds in the Baltic market

After a short relief offered by July, August brought global stock markets back into the red, mainly because of global energy price madness and the ongoing war in Ukraine, which pushed anxiety levels among investors higher and made it harder for them to stick to their original investment strategy. As per end of August, YTD performance of MSCI Europe Price Index was -12.2% and that of MSCI United States was – 17.3%. Baltic markets also experienced a rather substantial outflow of capital, suffering a typical fate of the Emerging Markets during market downturns. Baltic market Price Index decline reached a double-digit value of -15.7% since the beginning of the year. 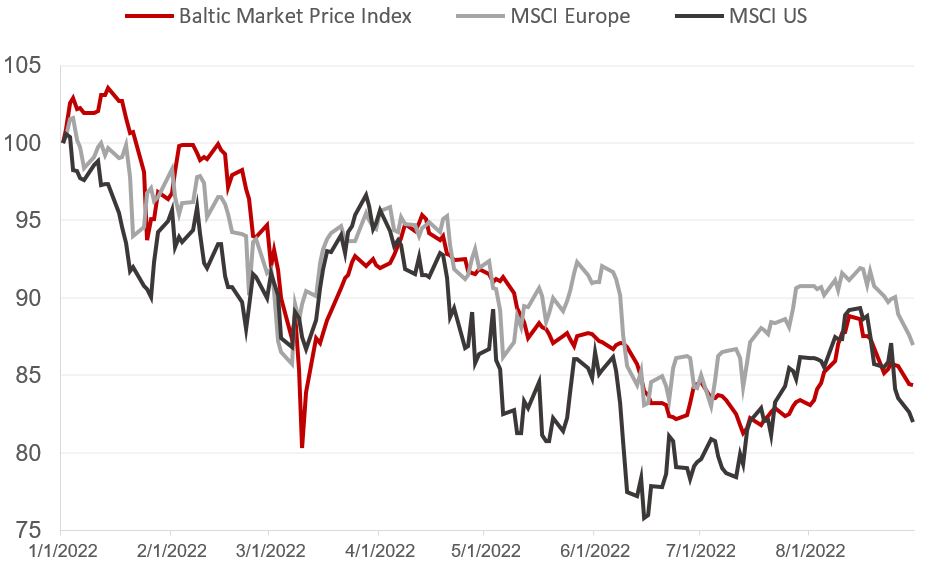 Interestingly, scarce on IPO activity Baltic markets have experienced a perfect storm of newcomers to the stock exchange during these tough times. In the last twelve months four companies joined Nasdaq Baltic Main list: Delfin group, Enefit Green and Hepsor in the fall of 2021, as well as Indexo in July 2022. All of them could be considered successful placements, many of which were even oversubscribed, thus attracting more retail investors to the stock-investing in Baltics.

The price performance of the latest Nasdaq Baltic joiners

At the end of August, most companies reported their first half-year figures. Results confirm investors’ fears about the deterioration of profits in the current economic conditions. More than half of companies reported cost increases that were faster than sales growth; therefore, facing margin pressure and worsening profitability.

25 out of 27 companies succeeded in growing their sales, and some even managed to double and triple their turnover. However, it was not enough to sustain the profitability level due to over-proportional cost inflation. Labor cost inflation, already witnessed last year, has extended into 2022 as well, while this year was marked by energy shock. Approximately 1/5 of companies reported operating loss and another 7 faced a decrease in operating income for the first six months of the year. 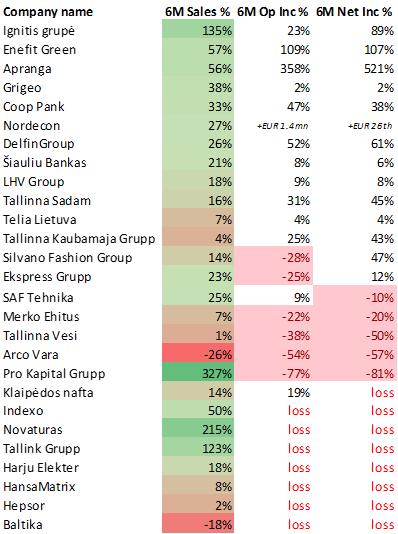 Is the glass half full or half empty?

11 of 26 companies, which have reported results, managed to grow sales as well as operating income and net income. Among them, unsurprisingly, are energy companies, as well as businesses from telecom and financial sectors. Also, Apranga, Tallinna Sadam and TKM showed a promising trend, restoring full-fledged operations in the post-COVID era. The financial segment which is well represented in the Baltic Main list – appears to be strong in its operations, except for Indexo, which closed 1H2022 with a net loss. Indexo is in the active investment phase paving its way for future banking business model.

For a number of companies, which have struggled a lot during Covid restrictions, it is hard to recover now, when consumer sentiment is low and the input prices are on the rise. The turnover of these companies is growing, but high expenses subdue their recovery, as it is not possible for them to pass all the costs to the customers. Another group that is currently suffering significantly is construction companies, which are forced to adapt to sanctions affecting their supply chains. These challenges are complemented by growth in COGS and a slump in clients’ purchasing power as a result of inflation.

Corporate results, reported by Baltic companies, reflect harsh market conditions when the supply disruption problem has not yet eased, while energy prices are already weighing down on profitability. Besides, some companies didn’t manage to diversify their revenue stream or supplies from regions with the extremely tough geopolitical situation and that is affecting results in an adverse way. However, one still can manage to extract the local pearls, whose business models exhibit resilience, can help to survive during the market downturn.