Outlook – How bad should it get before it becomes better?

Outlook – How bad should it get before it becomes better?

More clouds on the horizon

On July 11th, physical gas flow through Nord Stream 1 pipeline that brings Russian gas into Germany has essentially fallen to zero. Officially – due to scheduled annual maintenance that will last for twelve days, while an unofficial message is loud and clear – you imposed sanctions, and we cut you off the vital energy artery. Officials in the sector have already estimated that household energy costs in the country are likely to triple as a result. In the remaining parts of Europe, the situation is not much rosier either. According to OECD, already in the 12 months leading to March 2022, average home energy costs in the EU jumped by 41%.

On the other side of the Atlantic, market participants are getting vocal about the potential housing bubble. Strong pandemic-induced demand, coupled with slow construction, material inflation, and supply chain constraints, have caused a historic housing shortage in the US, while supply-demand imbalance resulted in soaring market prices. In 2022, the demand was so fierce that real estate agents were pitting buyers against each other, while builders were artificially limiting sales and were adding escalation clauses into contracts, allowing them to lift prices as costs increase. According to Realtor.com, the median listing price in the US hit another record high in June and stood at $450,000, up almost 17% year-over-year. However, as the country grapples with record high inflation and Federal Reserve is accelerating key interest rate hikes, rising mortgage rates most likely will push breaks on the demand. Market softening is already seen throughout the entire country – U.S. homebuilding plunged by 14.4% to a 13-month low in May, permits tumbled and sentiment among the nation’s homebuilders has also fallen for the sixth straight month in June.

Fig.1 Impact of the increase in energy prices on households’ budget for rural and urban households (as a % of total spending) (Source: OECD, Eurostat) 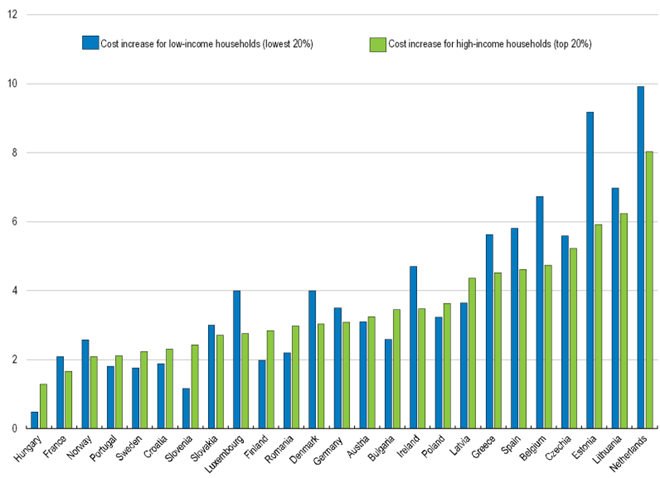 Another uncertainty is brought by the semiconductor industry. Since the last downcycle, the rhetoric has been rather straightforward – because the chip industry nowadays powers almost every aspect of the global economy, it has been gradually transitioning from being cyclical to secular. What used to be a “boom and bust” sector, whose growth was tightly correlated with GDP growth, nowadays is regarded as omnipresent, hence different. Whether this theory holds true or not is to be seen and quite soon – with earnings season unfolding, there are already first signs of broader weakness in the chip sector after nearly two years of strong demand. Because of subdued consumer spending and supply chain disruptions, global PC shipments have already declined by 12.6% in Q2 according to Gartner – the sharpest drop in nine years. The smartphone market has also shown signs of weakness, with global sales down by 4% MoM and by 10% YoY in May. However, if the non-consumer market remains strong, the semiconductor sector will find itself in a turnaround after all.

Fig.2 Share of semiconductor sales by application – demand continues to diversify beyond the consumer (Source: Bank of America, IDC, HIS) 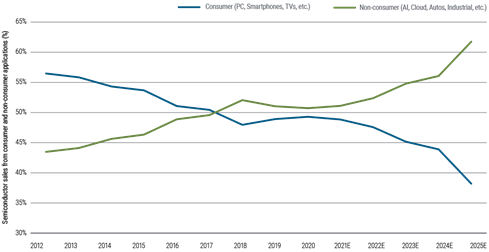 As already highlighted multiple times throughout this Review, the environment of the first six months of 2022 was beset by many uncertainties and, so far, many risks remain.  Given challenging global macroeconomic and political developments it was not a surprise that investors exhibited a tendency to abandon growth and turn to a value within equity, as well as favor other, lower-risk asset classes.

What was surprising was that the importance of being invested in fundamentally sound companies has been largely neglected. As a result, highly profitable companies with continuing good growth figures and, attractively valued, were sold off as much as, or even more than companies with a lot of rightful speculation about their future. We have been consistently highlighting that sustainable fundamental quality remains an attractive long-term investment even in these trying times because, among other things, they can withstand different headwinds, let it be inflation or rising interest rates. And there is a number of factors that contribute to this remarkable durability.

Quality companies are highly profitable and, as a rule, have lower operating leverage; therefore, their profits are less sensitive to revenue fluctuations. Moreover, quality companies are mostly leaders in their industry or niche and they retain this leadership position by, among other levers, remaining innovative. Thus, investments in research and development are one of the top priorities for such firms, and this is an activity they can easily afford thanks to above mentioned high level of profitability.

Being a market leader in a particular field also makes it possible for a company to dictate the price for the products or services it sells, thus keeping the profit margins at a high and stable level. Even if the input prices (like raw materials, wages) fluctuate or rise, which is an especially acute problem nowadays.

Also, one of the key features of Quality companies is a strong Balance Sheet and significantly lower financial indebtedness than an average company in the benchmark has; thus, these companies would be less affected by looming hikes in key rates. Capital intensity, which measures the need for capital to earn a certain profit, is another criterion in which quality companies enjoy a good position in a climate of rising interest rates and inflation. Quality businesses are usually less capital-intensive than the benchmark average, meaning they are less affected by rising input costs and can react to the fast-changing realities with more flexibility.

Given all the above mentioned, although we can’t see into the future, history can teach us a good lesson. And this lesson is that Quality companies have an excellent track record of showing resilience, fundamental strength, and the ability to navigate through tough waters.