The Quality shall prevail, stagflation or not

The only thing investors are dreading more than inflation is stagflation – a rather rare set-up in the economy, when inflation rates are high, economic growth rate is slowing, while unemployment remains steadily elevated. There can be different origins to this event, but most common are just two – poor economic policies or supply shock, latter of which we are witnessing as we speak.  Disruptions in the global supply chain first caused by the pandemic – induced restrictions are now being exacerbated by a huge package of sanctions imposed on Russia as a punitive response towards its invasion of neighboring Ukraine. The market reaction to that was extreme – oil prices soared to the highest level since 2008, while Russia originating commodities, like nickel, suffered historic short squeeze that caused prices to soar 250% in a day and forcing London Metal Exchange to halt trading. Western companies are cutting their ties with the country, Nord Stream 2 got frozen and Russian oligarchs are scrambling to hold on to their assets.

Global economic growth, that many have been counting on as countries finally exit two years under pandemic rule, has now become an endangered animal. With annual inflation in US at 7.5% and Federal reserve pursuing several rate hikes this year, slimming chances of economic expansion was the last thing that investors needed. As a result, gold prices soared, Energy sector is up double digit, while Growth stock got hammered.

Past might give good indications for present… not always

As quality companies do have Growth tilt, the start of the year has been difficult, and with stagflation card now possibly on the table, some may begin to question if quality remains the place to be. The last time US experienced stagflation was way back in the distant 1970’s, when Fed’s unsustainable economic policy during boom years of 1950’s and 1960’s caused wage-price spiral, while OPEC oil embargo in 1973 resulted in excessively high oil prices and shortages. While we do have some common denominators with that event at present, over the last 50 years the world and US stock market both have changed their faces way too much to justify drawing parallels with last stagflation.

Inflation as such, on the other hand, is more relatable in the historic context. Back in March 2021, MMT GlobalValue have published a rather interesting article, where they attempted to determine if inflation created a tailwind for Value stocks. 1 Upon looking at real returns in the inflationary regimes of 1920 – 2020 (where inflation rate surpassed 5%) it became apparent that Energy Commodities, Base Metals Commodities, alongside with Gold and Silver were the ultimate performers, while Technology equities, long-term US treasuries (30y) and high yield-bonds recorded the biggest losses. While those results certainly make a lot of sense and paint rather gloomy picture for higher risk securities, one nevertheless must remember that the last time US inflation broke 5% threshold (2021 excluded) was back in 1990, when US Fed hasn’t pledged to keep inflation rate at 2% just yet. Also, back then technology sector looked nothing what it looks like today as neither Alphabet nor Meta have been born yet, while Apple and Microsoft were hardware companies wrestling each other over operating systems market.

However, for the sake of an argument, let us see how Quality performed over last period when inflation was consistently above 2% (Table 1). With inflation rising, GDP growth slowing and Fed hiking its key rate, situation of 2004 – 2007 can be considered as somewhat comparable.

And in those challenging times it is evident that attractively valued quality stocks in US have managed to outperform the benchmark by a very wide margin (Fig.2). Energy sector, like nowadays, has been an absolute best performer with returns close to 200%, followed by Utilities. Materials, that host commodities and base metals, have also delivered returns almost twice that of the broader market. On the other hand, it should be no surprise that sensitive to consumer spending Discretionary sector has been a major laggard during those times of elevated inflation, while Financial sector took a massive hit in 2007 as a result of the unfolding financial crisis. And while IT lagged the MSCI US as well, Apple returned 1753%, Alphabet 277% and Microsoft 50% – it’s just their cumulative weight back in the days was too small to move the needle, while today first and last account for c42% of the sector (Alphabet got reclassified to Communications). 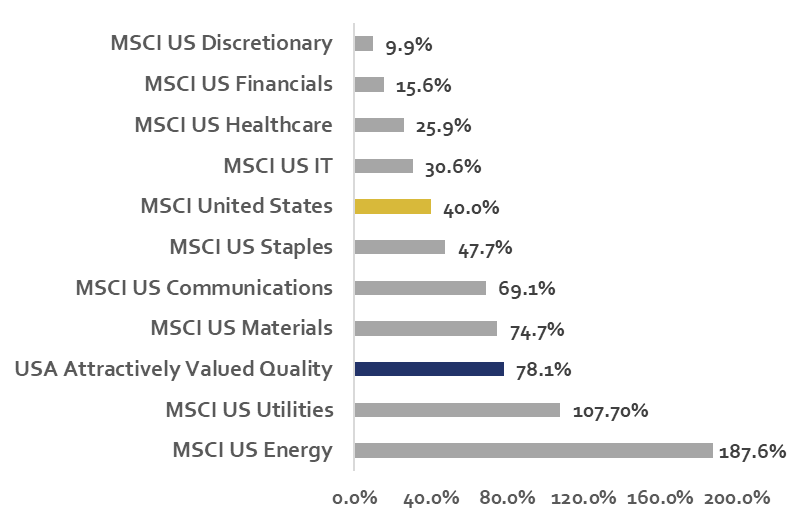 It is important to emphasize, once again, that market structure as well as quality landscape has experienced rather material change since then. As such, in 2004 as much as 20% of all attractively valued quality companies in US came from Energy, 24% from Discretionary, while IT was very scarce on quality with just 3% weight. Majors of Energy like Exxon Mobil, Chevron and Occidental Petroleum had significantly stronger financial KPI’s back in the days, but those have worsened materially since 2013 as their exploration CAPEX pressured cash flows, growing debt eroded balance sheets, while oil price recession thinned up the returns – not an uncommon scenario for capital intensive, price-taking industry.

Table.3: Distribution of Attractively Valued Quality in USA, by sectors

At the same time, digitalization spread across the world, fueling transformation from hardware to software, reshaping Technology sector, and giving rise to high quality, ecosystem-type business models with long-term growth stories. It also drastically changed landscape for Discretionary, whipping out those that failed to adjust to the new “on-line” reality. And although sector origins for quality can change over the years, our mission remains intact – to find best companies overall that would deliver outperformance in the long run. Scale, pricing power, leading market positions, mission-critical products and services, recurring revenues are timeless qualitative criteria (inflation or not) upon which our approach is based. Therefore, eventually, the quality shall prevail.